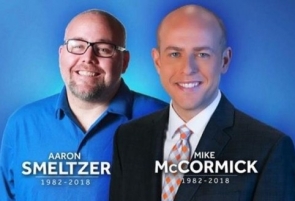 The southern region has had a recent shakeup, and everyone I’ve talked to has felt the effects.  A few days ago, WYFF4 (We’re Your Friend Four) reporter and anchor, Mike McCormick, and photographer, Aaron Smeltzer, died tragically when a tree fell on their SUV.  They were in Polk County, North Carolina, reporting on the storms coming from tropical storm Alberto.  Their deaths has brought the region, and the nation together in mourning, as we grieve their deaths.

Because I live around an hour away from Polk County, and because WYFF4 is my primary station for local news, this has hit close to home for me.  My family and I would watch Mike anchor the news on the weekends, and as I’m sure this happens to you as well, we talk about these anchors like we know them or they were a part of our family.

When something like this happens, we start to do research on the departed, or at least I do.  Both men were only 36 or 37, they both had loved ones, and both were passionate about their community.  A report last night had a woman, talking about Mike, and she said not only did he promote their glove drive, but he believed in it so much, he went into his closet and got out some of his own gloves to donate.

Since the news of their deaths broke out, I have sought comfort from my friend and fellow author, Deanna Lawrence.  I felt if anyone could understand what this all means, I figured she, a retired journalist and anchor of 30 years, would.  I told her, “Journalists really do put their lives on the line to tell a story.”  She agreed with that statement, because she’s been there.  She received death threats, she had guns pointed in her face.  You can read more about her stories in her memoir, Sometimes…A Storyteller’s Journal.

Something else Dee brought to my attention, years ago, is that we regard our news anchors like members of our family, and she’s right.  Every night at 6:30, my family stops everything and say’s “Lester Holt is coming on!”  Sometimes when they’re not on, we say, “Where are they?  Are they sick?”  Dee said people regarded her the same way, which is why she was able to get exclusives, rather than reporters who worked at a newspaper or radio station.  People put a name with the face, and they feel they have a relationship with them.  And they kinda do.

At one point, I thought it would be cool to be a journalist.  That was back when I was pursuing my communication degree, and instead of that, I decided to do public relations.  While I did do some journalistic work in A Guide to Historic Dillsboro, I decided to go down the fiction writing path.  And while I have no regrets, I do respect the work journalists do, and sympathize for the risks they have to take.  While some times they put their life on the line, I know none of them would say they would have it any other way, because they’re doing what they love.

Mike and Aaron will live in the hearts and minds of this area forever, and everyone sends their thoughts and prayers to the WYFF4 team.